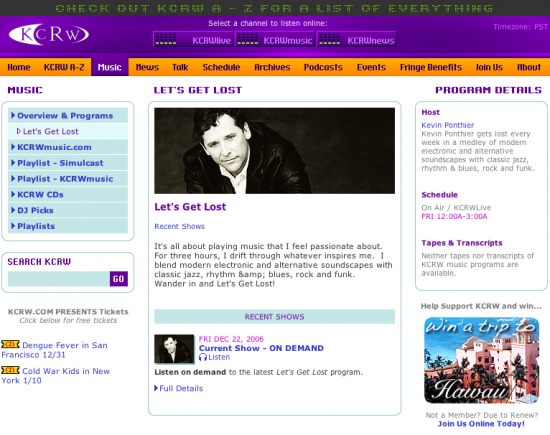 I’m very sad this evening. As I sit here, I’m working on several projects on the laptop. The television was running silently in the background, and I decided I needed some musical uplifting. I’ve been very out of touch to my usual listening haunts lately, specifically KCRW and my Friday night fav Kevin Ponthier’s show Let’s Get Lost. It happens sometimes, work and family become central, things get out of whack. Tonight I needed to get back into whack, and the archives for Friday’s Let’s Get Lost are where I headed.

But it appears Kevin has left! No mention of the show exists anymore, and the show has also been removed from the archives? I’m really bummed. Just a few days ago, Kevin himself left a comment here. At the time, I was just to happy to see the comment. I didn’t actually put 2 and 2 together until tonight.

A short history on why the show made an impact on me:

I grew up in L.A. listening to KROQ. Back then it was all 80’s, Depeche Mode and all. After High School, I moved to Nebraska for college. Nebraska is like a huge black hole for music. Honest. I held onto my roots for about a year, until the local party scene took over, where I became a hard rock/top 40/classic rock listener. Try and avoid it back then and it was nigh impossible.

I longed for what I remembered of my radio youth. Crazy DJ’s on KROQ who spun tunes I’d never heard of and made me rock.

When I finally made my way back home to L.A., I was greeted with what KROQ has become. KRAP. Total KRAP. And so, in my depression, I began searching the dial. I found KCRW. Odd tunes, odd sounds. DJ’s who actually chose ALL the music they played. No commercials? What was this thing?

Fantastic, and nothing less. My eyes opened to a whole new musical world with Morning Becomes Eclectic at first. In the evenings, I was getting my groove on with Metropolis and Nocturna. Nic Harcourt, Jason Bentley, Raúl Campos, these DJ’s redefined what I had come to expect from a radio disc jockey.

Then I found Let’s Get Lost on Friday nights, and my metamorphosis was complete. Kevin Ponthier played things that made me question all my past listening habits. I began to realize just how closed-minded I had been throughout my youth. How could I have been so blind? I had a new dialect, and I felt exhilarated.

And so, it’s with a sad heart I bid Mr. Kevin Ponthier farewell. I hope to find him in his next gig. I hope our government doesn’t stifle my ability to hear him and the brilliant choices in music he offers up. And it looks as though I need to get back to listening to my still favorite station just a bit more, so things like this won’t pass me by again.

Do yourself a favor. Go hit up KCRW.com and take a good listen. Forget what you know, for you know nothing. Yet.