Well, yesterday seemed like a big day for updates. Apple updated their Macbook Pro line, NetNewsWire 3 was released, Camino 1.5 came out, and a few others I’m too lazy to go Google for. While I may have to wait on the Macbook Pro, I grabbed me some updated software via NewsGator. Interestingly enough, I had recently stopped using both NetNewsWire (henceforth referred to as NNW) and Camino, both for different reasons. Since I’m writing here about NNW3, I’ll avoid the Camino drivel.

NNW has always been a great Mac application. The user interface is very slick, as well as customizable. There are very few things that I missed from Bloglines, and syncing across Macs was top on that list. Then Ranchero was bought out by NewsGator and, and not long after, syncing via NewsGator Online became possible. Now I could have my anywhere access (mobile as well!), and keep my beautiful Mac application. 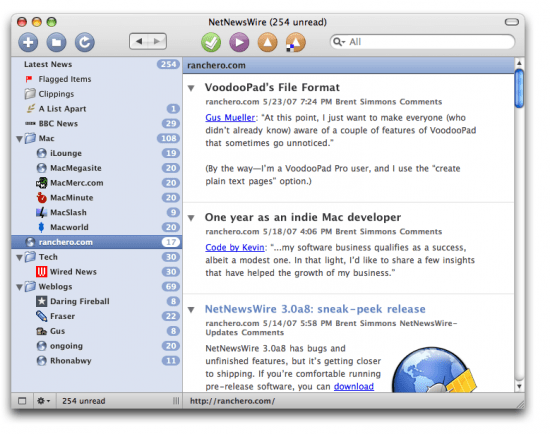 But there were issues here. The syncing was just not working. No matter what, my feeds always ended up out of sync. This becomes terribly frustrating when you are on your mobile. Having to weed through a ton of feeds that you’ve already read makes you want to pull out your hair. Thankfully, I’m already bald. So I ended up ditching NNW for Google Reader.

Now, NNW3 is out, and I’ve been giving it my all for the past day. My first impression? Meh.

This update looks to be mostly cosmetic. The new NNW has a whole new look from the previous version. A much nicer look I’ll say. And while I always thought that NNW was a bit drab, it worked and it worked great. So now, it looks nicer, but does it work better? Not really.

Some items that are in this new version are Spotlight access, new tabs, Growl, synced clippings, and others. So Spotlight I couldn’t care less about. I don’t use it much, but I don’t find myself searching my feeds that much. Tabs are all done a bit nicer, ala Opera. They look great, and on a large monitor they are nice. On a Macbook, no thanks. Growl? Should have been in there sooner. Synced clippings sounds kind of cool, but really only if your a NewsGator user. Syncing across Macs still doesn’t seem to be right. I end up clearing out too many items I’ve already read.

I’m bummed about this. I was really looking forward to this release a lot. Maybe too much. I’ve got more I could write about this, but I won’t. I have a lot of respect for Brent Simmons and the work he’s done on this application. I paid my money, and I’m glad I contributed. But for now, I think I’ll be sticking with Google Reader, sadly.